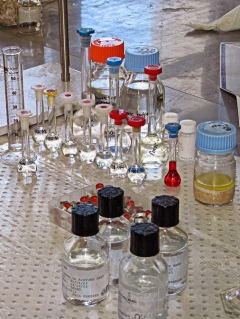 “What have you done?” Alvina whispered taking out her wand. “Which incantation did you chant? Where are we?”
“I don’t know,” Kimbra mumbled, chewing her cloak’s strings.
“Look’s like a potion making room,” Alvina said.
The tubes and bottles glinted as faint sunlight filtered through wide rectangular openings. Alvina fingered the smooth glass tubes. They didn’t have such smooth and same sized ones in their academia.
“Are we in the future or in the past?” She wondered aloud.
Kimbra was of no use in this fiasco, Alvina could hear her sniffling. Though they were friends and in the same study group, Alvina was the one who had her head on her shoulders.
They had definitely traveled in future, she concluded, for Alvina knew everything about their history. She couldn’t see anything related to past. The place appeared to be deserted; future people were not early risers.
Curiosity won over fear.
Alvina started to explore the neat surroundings. The room was square, most of the things were square or rectangular. The tables were of metal, not wood, metal bent in odd shapes. The caps on the bottles were of different colors of a soft material, one she had never come across.
“Alvina…,” Kimbra called. “Look at this small bottle, isn’t it pretty?” Kimbra was holding a small phial with a red cap. “It could be perfume,” she said.
“Leave it. Don’t touch it,” Alvina said, but Kimbra had already opened it.
She sniffed it. “It smells good, it’s a perfume.” Kimbra chuckled and then giggled.
“Close it.”
Alvina snatched the cap from her hand and put it on the bottle, but it did not fit. She tried again and accidently twisted it. She felt it catch the bottle opening. She again twisted the cap and it settled down firmly on the bottle. Hah… so that’s the trick. Kimbra laughed aloud.
“Shh… don’t laugh…, “ Alvina said.
But Kimbra went on laughing.
“What’s happened to you? What was in the bottle?”
Panicking Alvina picked up the bottle and tried to read the information. It was in a strange language with three main symbols ‘N’, ‘2’, ‘O’. She looked at Kimbra still giggling and felt tears well in her own eyes. What should she do now?
Alvina heard someone opening the door, her heart thudded. She caught hold of Kimbra’s hand and looked here and there for a place to hide. All of a sudden she felt the familiar pull and a moment of blackout, she had experienced when Kimbra had chanted the strange incantation in their book.
Alvina found herself back in the academia book room with their Head Scholar thundering in front of them. Kimbra was now smiling like a fool.
They had to do all their work without magic for the next two full moons!
_________________________________________________________________________________