Skip to content
This review is part of B00KR3VI3WS tours.

This novelette is a companion book to The Many Lives of Ruby Iyer. A peek into the soul of an angry, young girl, who will come of age in a city on the verge of total annihilation. Ruby kept a diary from the age of ten till she ran away from home at sixteen. It is from here that I picked out a few diary entries for åThe Ruby Iyer Diaries. This short series of vignettes from Ruby’s life, tells you more a little more about the origins of Ruby Iyer.


My Review
I have read quite a number of Young Adults novel, but all of them by foreign authors set in other countries. Authors in India are dabbling with this genre, but there are none which standout. The Ruby Iyer series, a ‘first’ from an Indian author that too set in India, has made me really excited.

’The Ruby Iyer’s Diaries’, the first in the series or 0.5 version, gives us a peek into the early life of the protagonist—Ruby. Human beings are a product of our genes as well as the environment we have been nurtured in. The various incidents in Ruby Iyer’s childhood—some trivial, a few life-changing—give tantalizing details about that environment and upbringing of Ruby.

Laxmi Hariharan has captured the day to day struggle of a tomboy-ish teenage girl to perfection; her disagreement with her peers and tussle with her mother who is partial to the brother because he would carry name of the family. Everyone wants Ruby to conform to conservative mold of an Indian girl/ woman, which is a burden on her free-spirit personality. The author has expertly brought put the teenage rebellious nature and her dilemmas.

I normally don’t talk about cover—I feel its more of a personal choice —yes they need to be attractive, but this one really captured my attention. The color combination is sophisticated and tantalizes me to open and read. The eye-catching common theme runs in all the covers of the series.

Ms Hariharan narration is fluent and smooth. I could picture the scenes and sense Ruby’s discontent, insecurities and confusion. All in all a very neat and interesting start.

I would be posting reviews for the next in series, so stay tuned for more on Ruby Iyer. 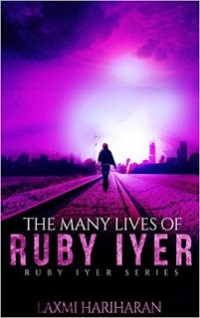 The Many Lives of Ruby Iyer (Ruby Iyer #1)
When her best friend is kidnapped, Ruby will stop at nothing to rescue him.

Criminals run the streets of Bombay. Jam-packed with the worst degenerates. The city is a shell of the pride and joy it used to be.

Ruby knows something must be done, but it isn’t until her best friend is kidnapped by the despotic Dr. Braganza that she knows that she and she alone must save city, save her best friend, save the world from total destruction.

Armed only with with Vikram, a cop-turned-rogue they are about to embark on a road they may never return from. 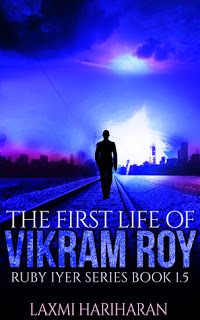 The First Life of Vikram Roy (Ruby Iyer #1.5)
His family is being held to ransom by a deadly mastermind.

Vikram never should have left his family, but when Vikram’s father bring his half-brother Vishal home, life will never be the same.
Vikram thinks things will be better now that he’s gone. He’s met the love of his life, his future looks bright and then everything is shattered.
Now, his family’s life is hanging in the balance, and only Vikram can do what needs to be done to save them.
From the bestselling dystopian fiction author with over 200 reviews and ratings of her dystopia books across Goodreads, Amazon and other retailers. 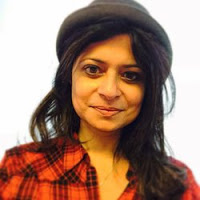 She almost died. But when dystopia romance author Laxmi Hariharan had a near death experience, she was told to write. Laxmi is the creator of dystopian romance series, RUBY IYER SERIES (The MANY LIVES OF VIKRAM ROY – FINALIST Indie Excellence Awards, the bestselling The RUBY IYER DIARIES , The FIRST LIFE OF VIKRAM ROY, The SECOND LIFE OF RUBY IYER & VIKRAM ROY, PANKY’s FIRST LIFE), and the Amazon bestselling, eLit Gold winner, The Destiny of Shaitan (Bombay Chronicles, 1). If you’re looking for books like Divergent and Angelfall, you’ll love the RUBY IYER SERIES.
Laxmi writes books similar to Hunger Games while listening to electronica & progressive rock, and downing innumerable cups of extra sweet ginger-chai. She is also an avid photographer of street art and believes she was a tree — a redwood — in her past life. London is where she creates. Bombay is what fires her imagination.