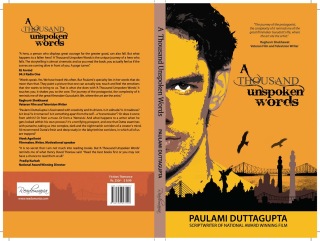 Note: This review is part of ‘The Book Club’ blog tour.

Genre: Romance/ Literary
Publisher: Readomania Publications
Blurb :
A hero, a person who displays great courage for the greater good, can also fall. But what happens to a fallen hero? A Thousand Unspoken Words is the unique journey of a hero who falls.

The champion of the underdogs, the writer who uses the nom de plume Musafir is famous in Kolkata. His incisive criticism of the injustices around him earn him many enemies but he holds his ideals above all else. Scathing attacks at his books and a night of hide and seek from political goons leads Musafir unto a path he never liked, faraway from his ideals. He runs away and chooses the comforts of money over the travails of following one’s ideals. The hero falls.

But Tilottama, passionate fan’s hopes don’t. When he comes back after many years, emotions, love and lust take charge and an affair brews. Will she bring back her hero? Will he rise again? Or will the thousand untold words, the many stories of the ideal writer be lost forever?

My Review:
Don’t we all love to have a ‘hero’ in our life?

But isn’t expecting a mere mortal to exhibit exemplary qualities endlessly without any slack a bit too much? The novel beautifully presents this very aspect of humanity – the story of a fallen hero, who is also a human being.

‘A Thousand Unspoken Words’ explores the complex minds of a highly talented writer and his biggest admirer, who also becomes his nemesis. The novel also brings forth the issue which plagues humans the most—inability to accept the realities of life.

For the protagonist Tilottama ‘Musafir’, the anonymous writer is a hero, who is fighting for the rights of the oppressed and innocent people. On a rainy night in Calcutta she meets a man running for his life and provides much needed sanctuary to him. Later she comes to know that he was the one whom she had put on her heart’s pedestal.

Musafir had to pay dearly for the crusade he had started with the might of his pen. His printing press is destroyed, he had to flee from his hometown and his father dies. Fearing for his life, he was not even allowed to come for his father’s last rites by his mother. The pressures and practicality of life forces him to become something else, and he falls in Tilottama’s eyes.

‘A Thousand Unspoken Words’ is the story of their struggles, love, expectations, and acceptance. The author has expertly dealt with the imperfections or natural human failings of both the protagonists. The characterization is near perfect and the end is beautiful. The story lingers in the mind and forces one to acknowledge that even heroes are humans and we should make peace with their weaknesses. 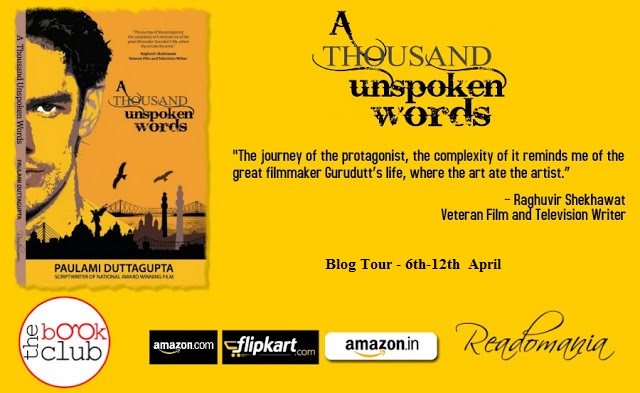 Grab your Copy @
amazon.com | amazon.in |
ABOUT THE AUTHOR

Paulami DuttaGupta is a novelist and screen writer. She shuttles between Kolkata and Shillong. She has worked as a radio artist, copy writer, journalist and a television analyst at various stages of her life, having been associated with AIR Shillong, The Times of India—Guwahati Shillong Plus, ETV Bangla, The Shillong Times, Akash Bangla and Sony Aath.As an author, her short stories have appeared in various anthologies and literary magazines. A Thousand Unspoken Words is her fourth book. Paulami also writes on politics, social issues and cinema. Her articles have appeared in Swarajya, The Forthright and NElive.
Paulami is associated with cinema and her first film, Ri-Homeland of Uncertainty received the National Award for the Best Khasi Film. Her second film Onaatah—Of the Earth is at post production stage and will release in 2016. She is currently working on her third screenplay. A short film tentatively titled ‘Patjhar’ is also in the pipeline.
Paulami is a complete foodie and is almost obsessed with watching one film every day. She also loves reading—political and social commentaries are her favourite genre. Literature classics and books on cricket are also a part of her library, apart from a huge collection of romances. Jane Austen’s fictional character Mr. Darcy is her lifelong companion. She is an ardent fan of Rahul Dravid and has been following all news about him for almost twenty years now.
Stalk her @

Follow The Book ‘s board A Thousand Unspoken Words by Paulami Duttagupta on Pinterest.//assets.pinterest.com/js/pinit.js

Everyday new links and tasks will be added. Follow The Tour Hosts of ATUW by +PaulamiDuttagupta

This Tour is Hosted by

We Promote So That You Can Write